With a slogan of ‘Let’s get it done’, New Holland has a reputation for making practical machines for both agriculture and construction. But how long have they been ‘getting it done’? And what do the present and future hold? 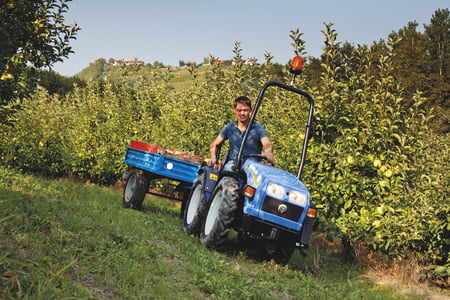 A Tale of Many Merges

In 1895, Abe Zimmerman founded an equipment repair shop, turning it into a machinery company eight years later, naming it after his hometown, namely New Holland, Pennsylvania. The company began producing agricultural equipment, such as a feed mill. 1947 saw Sperry buy out New Holland to form Sperry New Holland, adding the Belgian company Claeys, creator of the first European self-propelled combine harvester to the corporation in 1964.

During the 1970s, Sperry New Holland brought out several new products, such as the skid steer loader, and the first ever Twin-Rotor® combine. In 1986 Ford bought Sperry New Holland, to become Ford New Holland. Just five years later Fiat bought the company, renaming it N.H. Geotech. On the completion of the merger, the company launched itself as New Holland at a worldwide convention in London. The Case Corporation is also purchased by the Fiat Group, joining with New Holland N.V. to form CNH Global.

The new millennium began a wave of new eco-friendly developments, such as the TM190 tractor, running on 100% biodiesel for 20 days straight, and the NH²™ hydrogen tractor. In 2013, a prototype for a methane-powered tractor was unveiled at the Agritechnica Show in Germany, starting production in 2019. For a more complete history, take a look at our previous blog, The History of New Holland Tractors.

New Holland boasts a comprehensive range of tractors and machinery, including these compact tractors:

For over a century, New Holland has been living up to its slogan ‘Let’s get it done’. The company has already started working towards an environmentally sound future, and we can only guess at what their new innovations will be!

For more information about New Holland, visit their website: https://agriculture.newholland.com/eu/en-uk