The Pick of the Pumpkins

During early autumn in the UK, you’ll see hundreds of pumpkins adorning porches, walls and windowsills in the lead up to Halloween at the end of October.

Around 15 million pumpkins are grown in the UK every year, with visits to pick-your-own pumpkin patches becoming a staple autumn activity. For many people, the return of pumpkin-themed produce marks the change of season, as people rush to cosy up with their first pumpkin spice latte of the year (forget the big corps — make your own or head to a local coffee shop instead!).

So, if you own a small farm or smallholding and would like to diversify your offering, growing pumpkins can be a thoroughly rewarding enterprise. 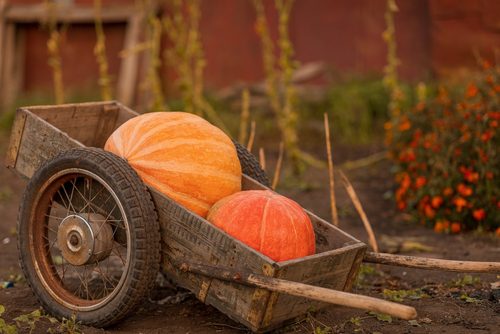 Pumpkin carving originates from an old Irish myth about ‘Stingy Jack’, who was sentenced to roam the earth when he died after tricking the Devil for financial gain. As a result, he wasn’t allowed into heaven or hell, and people began carving devilish faces into turnips to ward off his spirit.

After Irish immigrants arrived in the US, people replaced turnips with pumpkins, which have grown in North America for 5,000 years. Eventually, the tradition was incorporated into All Hallows’ Eve celebrations, and we’ve been making jack-o’-lanterns ever since.

Today, 95% of pumpkins in the UK are carved for this purpose and used in cooking. Pumpkins are a versatile fruit (not a vegetable!) featured in many delicious recipes such as bread, risotto, cakes, soups, chutneys — and, most famously, Thanksgiving pies in America.

But they’re not just suitable for eating. The attractive appearance of different pumpkin varieties means they make lovely decorations, available in a natural selection of colours — including grey, blue, green, white and the conventional bright orange. Once dried out, an ornamental ‘gourd’ can hold up until the following Halloween!

The average UK yield of fruit is 4,250 per acre, which equals just under one per square metre. So, you don’t need a vast amount of land to get a decent crop.

Ensure you choose a plot with exposure to full sun and shelter from cold winds and sow seeds directly into the ground in late May and early June. Allow two seeds per planting hole and place them on their side about an inch deep into the soil. Then, after a couple of weeks have passed, thin the weaker seedling and leave the stronger to grow. 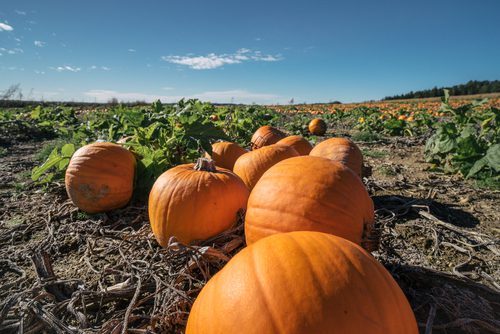 Pumpkin plants need plenty of rich, well-watered soil, but they’ll rot and fail if conditions are too wet. So, before planting, ensure the soil is well-drained and not too damp. Prepare the area by loosening the earth with a cultivator and mixing it with compost for added nutrients. Vines and roots can be fragile, so don’t overcultivate once your plants are in the ground. Instead, use good-quality mulch to keep the soil moist, suppress weeds and deter pests.

The size of the harvested pumpkin will depend on the variety you have chosen and how many pumpkins per plant you have — you may want to remove smaller fruits from the plant and leave just two or three to grow to their full size. If you want a smaller pumpkin, opt for a smaller type. And don’t be tempted to pick it early; every pumpkin should be fully ripe when you harvest it!

Whatever produce you choose to grow at your smallholding, we’ve got all the equipment you’ll need to give your crops the best chance of success. Contact us today to find out more about our products and services.