In our previous blog, Fawning Over Deer Farms and Parks we mentioned a local deer farm in West Harting near Petersfield, Sky Park Farm, which has gone from strength to strength since its inception. On one of the sunniest days of the year so far, I had the pleasure of interviewing Craig, one of the Rangers, about the ins and outs of working at Sky Park Farm. 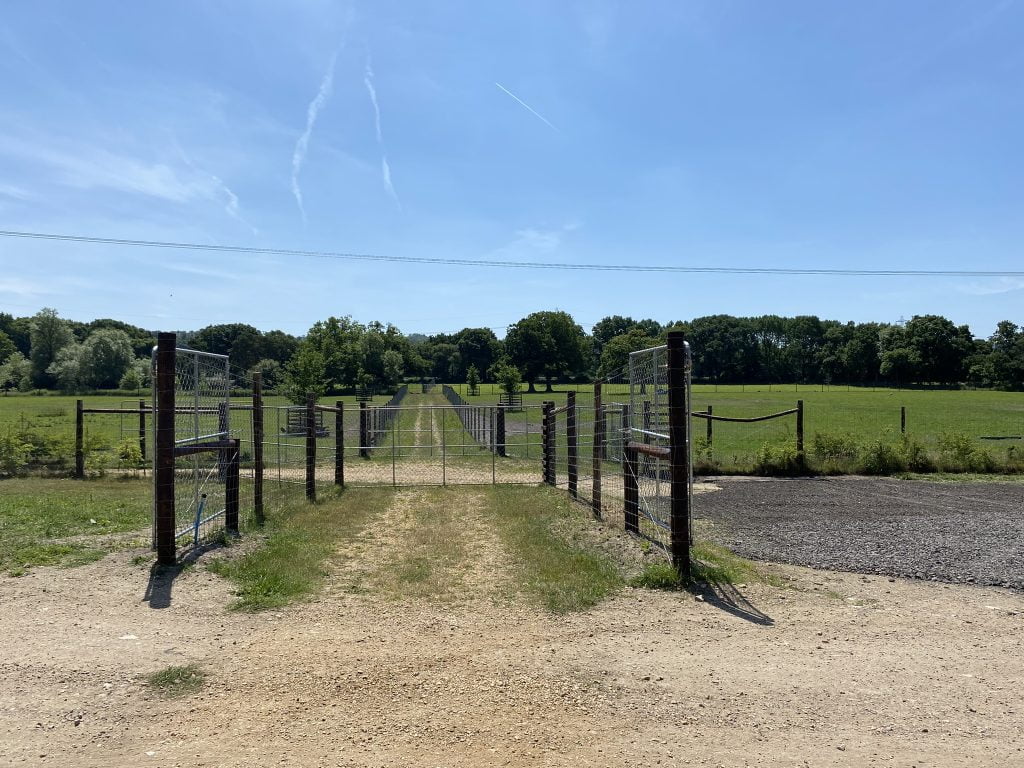 Despite the centuries’ old tradition of deer parks in the area (a hart is a male deer and the local villages, South, West and East Harting a reflective of this heritage) Sky Park Farm is a recent addition to the Hampshire countryside. The derelict farm was bought by the current owners, Pierce and Victoria Noonan, in 2016. Victoria grew up in Harting she’s very much a local girl, so when the couple moved back into the area, they fulfilled their dream of starting their own deer farm. The state of the land meant that it took a while to construct the paddocks and the races between them, before the deer could be brought in. Breeding stock were carefully sourced from other respected deer farms around the country. With excellent husbandry, the quality of the venison shone through and soon Sky Park Farm was selling venison to Waitrose, and later to Marks & Spencer.

With education at the heart of their mission, Pierce and Victoria were keen to enable public access to Sky Park Farm to learn about the workings of a deer farm. The farm officially opened to the public on the 21st May 2021, right in the middle of Covid restrictions. Although the ‘building was a bit delayed by the lockdowns’, the business has been largely unaffected by Covid. ‘We weren’t so impacted by the two metre/one metre inside space issue because the Farm Experience is outside. The Farm Shop, Butcher and The Grazing Rooms restaurant opened at the end of the year to be interrupted by a lockdown in December, but ‘we were prepared for the restrictions’. 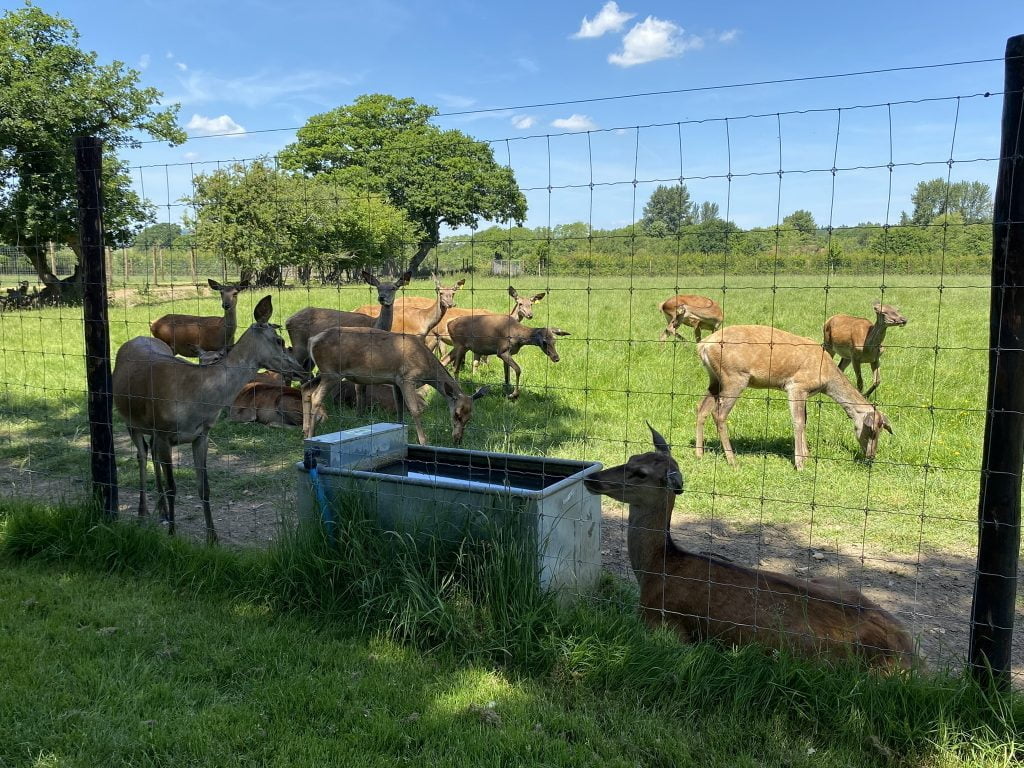 Sky Park Farm currently rears three types of deer; red, white and sika. The sika is a Japanese breed of deer, first introduced to the UK in 1860. It is the smallest deer breed at the farm, but has a long history of being used for meat. Red deer are the largest wild land mammal in Britain, and produce larger cuts of venison than any other deer species. The white deer is a type of red deer with a mutation called leucism.

Deer are different to other farm stock in several ways, first and foremost in their independence. Craig, one of the Rangers, has first-hand experience of this, saying ‘during calving season the hinds are very efficient and deliver their calves without need for intervention. We check them regularly but can leave them to do it all naturally’. He adds ‘we feed them daily all year round but have to feed them more in the winter because there is less good quality grass in the colder months. The ultra-high-quality venison provides a healthy, low fat meat and has total traceability and a gentle carbon footprint’.

Though Craig tries not to get attached to the deer, some have a strong personality. He tells me about Edal ‘hand-reared by the old Estate Manager’. According to Craig, she even tries to get into his Polaris at feeding time! She can be spotted easily by her precocious nature and lack of ear tag. 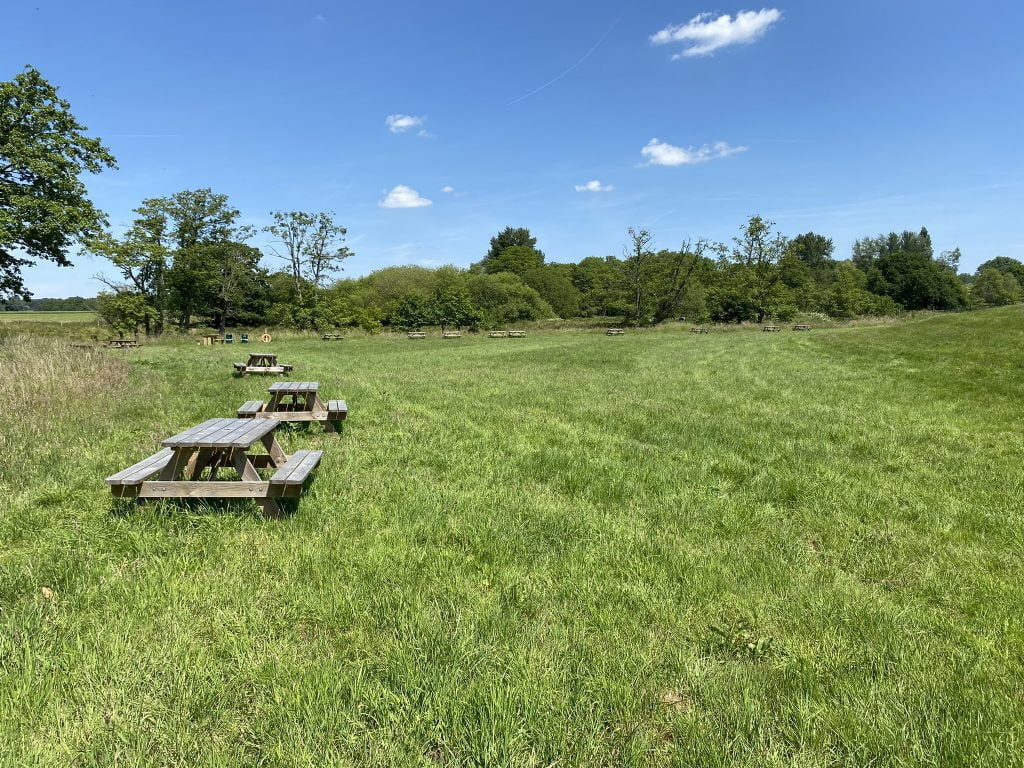 At Sky Park Farm visitors can see the deer up close and even feed them. But there is plenty more to see and do. Especially on days like my visit, there is a beautiful walk along the Farm Trail through the races between the paddocks, as well as a route by the River Rother. If you want to stop to appreciate the South Downs scenery, there are picnic tables around the farm for a quick break. You can also tire out your children in the expanding playground, with a dedicated area for under 5s.

The Grazing Rooms restaurant offers a selection of dishes, including venison, with a seasonal menu based on the produce of the local area. Their mission is for 40% of produce to come from within 30 miles of Sky Park Farm and another 40% to come from Hampshire, Surrey and Sussex, in both the restaurant, Farm Shop and Butcher. Not only is it better quality, but this also supports other local farms and businesses. You will even find a specifically created observation beehive.

Sky Park Farm can offer tailored talks in the Education Centre for groups as varied as school trips, local community groups and industry talk and courses. For an immersive learning experience, or just a lovely day out, you could do worse than a visit to Sky Park Farm.